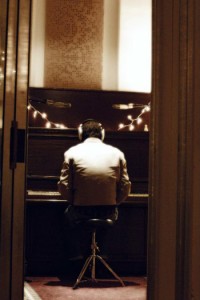 Jeffrey Carter Albrecht was born June 23rd 1973, and grew up mostly in Memphis, Tennessee and Derby, Kansas – just outside of Wichita – where he learned piano under the guidance and instruction of his mother, Judy. During summers in his high school years Carter played dulcimer and traveled extensively with CHOICE Lifestyle, a group of talented teens from Kansas.which also included contemporary Christian songwriter and Dove Award winner, Rich Mullins. CHOICE Lifestyle performed music and drama at youth conventions and camps throughout the U.S., and Carter often remarked fondly on these travels with fellow musicians as an important time in his development.

Throughout high school Carter studied with Dr. Sylvia Coats, who greatly prepared him for his arrival at Southern Methodist University and the Meadows School of Music, where he graduated in 1995 with a degree in piano performance. An encyclopedic devotee of most forms of music, with a sweeping command of influences and styles, Carter would go on to play a major role in several Dallas bands (The Limes, Sparrows, Sorta)  and perform on countless studio releases, for which he was always in high demand. When he wasn’t recording and touring with such esteemed artists as Charlie Sexton or Edie Brickell, he followed in his mother’s footsteps, teaching piano to many aspiring young students.

An inspiration to so many who met him or heard him perform, it was his bigger-than-life personality and wonderful sense of humor which many recall adoringly since his untimely passing at the age of 34. But it was his profound gift for melodies and words, composition and arrangement, combined with his professionalism, reliability and commitment to excellence in his craft which defines, and will sustain, his legacy in music.