Great news! Abbie Chesney, owner and creative at eye on the sparrow designs and a best friend of the CAMF, announced her new project, the arrival of a new CD featuring original songs by local artists.The CD features 14 songs by local songwriters and groups, and includes an alternate take from Carter’s “Jesus is Alive and Living in London” sessions. The CD promises to be the first in an ongoing series, and will be commemorated with a live show on Thursday, September 6th at the Kessler Theater in Oak Cliff.

For the first installment of The Sparrow Project Volume 1: Change The World, Abbie sought the guidance and expertise of renowned local producer Salim Nourallah. Salim assisted in selecting songs for the collection, several of them by artists who have recently recorded at his Pleasantry Lane Studios in Dallas. Salim also penned a memorial for the liner notes.

Featured artists include Dave Little, Chris Holt, John Lefler, Sammy Strittmatter, Salim Nourallah – all of whom will be performing at Thursday night’s concert – along with Gabrielle LaPlante, Smile Smile, Nicholas Altobelli, Coyotehead, Sealion, the last ones on earth, From The Skies, Alex and Jeremy, and Mindsigh. 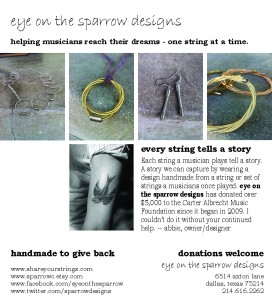 An $8 suggested donation at the door on Thursday night will net you a free copy of The Sparrow Project, all proceeds of which benefit the CAMF. We deeply appreciate and roundly applaud Abbie for her unwavering dedication to the foundation and encourage you to seek out eye on the sparrow designs if you are looking for a unique gift for a friend or loved one… or if you just want to support music like we do.