April 20th, 2015
The Carter Albrecht Music Foundation is happy to announce the donation of one of Carter’s guitars to the second annual Open Carry Guitar Rally in Dallas. The tobacco burst Fender Stratocaster will be auctioned off leading up to this already legendary event that will take place on the Continental Pedestrian Bridge on May 3, 2015.

The Open Carry Guitar Rally began last year by local musician Barry Kooda (The Nervebreakers) in response to the spate of open carry gun rallies being held across the state of Texas in large public establishments such as Chili’s and Target. The Rally seeks to promote common sense gun control with a great sense of humor. 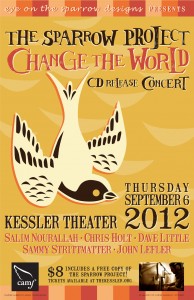 Welcome to the Carter Albrecht Music Foundation, honoring the memory of one of the Metroplex’ most beloved songwriters, and dedicated to the growth and betterment of music in Dallas by offering assistance in education, skills development and improving the quality of life of its musicians.

To get you started exploring the site, here is one of Carter’s compositions, My Beautiful Life, as performed by his dear friend and CAMF Scholarship Chairman, Salah Boukadoum.

Audio clip: Adobe Flash Player (version 9 or above) is required to play this audio clip. Download the latest version here. You also need to have JavaScript enabled in your browser.